Our goal for the Olde World Sailing Line is to provide our guests an experience they will long remember, and by so doing, that our guests will help us grow by sharing these memories with friends and family. To differentiate our company from the scores of other sailboat ride operations up and down the Gulf and Atlantic Coasts and to develop a product that truly exudes excellence and quality, Kathy and I decided from the design phase to create a sailing line that celebrated the romance and opulence of the Golden Age of Sea Travel as well as the era of the tall ships. The period is remembered for its over-the-top service, attention to every detail, and level of amenities long lost in today’s travel industry.

In developing this business design, we knew that the boat itself would need to become the centerpiece for our production. To tell our “Golden Age” story, we would need a very special boat – one that had the classic look and feel of an elegant sailing yacht from another time. It was important to us to avoid the “cookie cutter”, “Clorox bottle” look and feel of most modern production boats. And while the boat itself would become the center stage for our maritime heritage tribute, it would be the details of service, amenities, and traditions that would bring it to life.

Music and Entertainment – The Lifeblood of Our Maritime Legacy

The early 20th Century saw luxury steamship liners with standards of traveler excellence unrivaled today. It was a time when

“First Class” meant guests were entertained and treated as royalty. Anyone who has seen the epic movie, Titanic, understands the central role music played in these grand steamship lines, both in First Class and Steerage. Even much earlier throughout the centuries of the great tall ship, music played a pivotal role aboard most all blue water ships, particularly those flying the flags of England, Canada, and the new America.

Sea Shanties, as they became known, were as integral to the operation of a sailing ship as the rigging and canvass themselves. Whether a passenger vessel, a freighter, or a ship of war, the massive tall ships that plied the Trade Winds between Europe and North America required the rigorous yet coordinated labor of a well-trained crew to operate them.

To help lubricate this fine-tuned machine of human labor to hoist heavy sails, trim sheets, and weigh anchors and chain, sea shanties arose to orchestrate the rhythms and cadence necessary to synchronize the repetitive movements of the ship workers. Back in the day, a common expression emphasized the power of shanties – “a song is worth 10 good men”. They also served a social purpose – singing is pleasant, helps alleviates boredom, and lightens the burden of extremely hard work. Sea shanties flourished from at least the 15th century through the days of steam ships in the first half of the 20th century. Many survive to modern times in various forms, such as “Blow the Man Down” and “What Do You Do With a Drunken Sailor?”.

Paying Homage on Every Voyage

All successful businesses develop a unique niche that distinguishes them from the competition.

One of the ways Olde World Sailing Line pays tribute to this rich maritime heritage is through onboard sea shanties, period jigs, and other music performed on one of the world’s oldest instruments – the harp.

In another occupational lifetime, Kathy was a professional harpist, playing Principal Harp for the Florida Orchestra for over 15 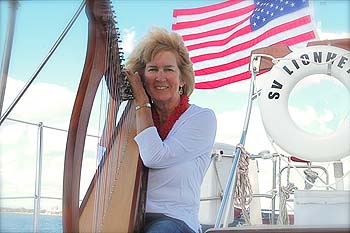 years. As a soloist, she played the Grand Hotel in Oslo, Norway for a four-month engagement. She toured Europe, performed for Princess Grace, and even played New York’s Carnegie Hall. Kathy has been retooling her repertoire and has traded one of her 6-foot grand concert harps for a beautiful imported “boat-sized” Celtic Harp.

Kathy’s new gig on Lionheart will have you stomping your feet and ready to party! We may even break out an array of classic drums and other noisy percussion for some of you so inclined to jump in and hang on. And before she’s finished, be sure to ask Kathy to show you the aeolian sounds of the four winds – it’s a mystical and rare sound heard only in extremely rare circumstances.

This is just one of the ways that we hope you’ll agree that Olde World Sailing Line is much more than a boat ride.