The winter months in Central Florida are some of the most beautiful months of the year. The air is crisp and clear as well as the waters of Tampa Bay as summer algae dissipates. This year November and December have provided us many spectacular sails, brilliant sunsets, and abundant wildlife encounters.

As many of you have experienced, Lionheart is often escorted by playful pods of dolphins throughout the year, frequently coming alongside a mere two or three feet from the hull riding our wake. But during the winter months the dolphins are joined by an influx of huge flocks of migrating water birds, including the rare white pelican. On numerous November and December sails we have encountered bald eagles as they dive for nearby fish. The most anticipated winter visitor, though, is the iconic manatee. These warm-blooded mammals, reputedly mistaken as mermaids by early sailors, look a bit like a walrus without tusks. Manatees are strictly herbivores, feeding on sea grass and other vegetation, and are very social animals.

As the Gulf waters cool below about 68 degrees F, manatees move into the warmer Tampa Bay (as well as fresh water springs and rivers). Since they must rise to the surface to breathe, manatee sightings are a highlight of any Olde World

Sailing trip, thrilling our seafaring guests both local and out-of-state. But given that Tampa Bay is Florida’s largest estuary spanning around 40 miles from Tampa to the Gulf, spotting manatees is not an everyday occasion aboard Lionheart. The good captain, however, can point you to a very nearby “Manatee hole” where you’ll see wild manatees by the dozens – up-close and personal.

The Tampa Electric Power Plant, in Apollo Beach, burns coal to generate pressurized steam that drives their turbines. To convert this steam back to water, the plant pumps in cooler seawater from the bay. As the seawater interacts with the steam, it too becomes much warmer. This warm seawater is then discharged back into a canal next to the power plant. Manatees like this a lot!

Manatee Sanctuary    In 1986 the state of Florida declared this canal an official manatee sanctuary. It is a winter hot spot for migrating manatees.  The Tampa Electric Company has built a visitors center and beautiful boardwalk overlooking the canal. There you can learn more about manatees and walk out over the water to view dozens and dozens of manatees in their natural habitat.

Take I-75 south from Tampa and exit at the Apollo Beach exit. A left hand turn from the ramp will take you directly to the Tampa Electric Manatee Viewing Area. There is no charge to enjoy this fabulous natural wonder. Tell them Captain Mac sent you (http://tampaelectric.com/company/mvc/).

Please Be Careful On the Water

During 2013 Florida recorded more manatee deaths than ever before – 800+, vs. around 300 in 2012. Scientists are not sure the reasons for the jump in mortality, but injuries and death by speeding boats is one serious cause. Please observe Manatee Zone signs when you’re on the water.

Manatee Up for Air

Mother Showing Off her Newborn 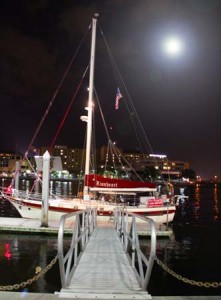 Back at the Dock after Full Moon Cruise

In mid-June, Olde World Sailing Line will present one of its most unusual cruises, unique in all of west-central Florida. On Saturday, June 22, the sun will set at 8:24 pm, the second longest day of the year. At about the same time the sun is setting in the west, the full moon will be rising in the eastern sky – a fairly rare event.

As the sky turns from bright reds and oranges through deep shades of purple, the huge full moon will dominate the eastern skies. While close to the horizon, the full moon appears twice its normal size, painting ever-changing Monet-like reflections on the waters. It is a rare and spectacular sight to behold.

Lionheart will make other Full Moon Excursions on other days surrounding June 22nd. Friday’s sail is fully booked, but Sunday and Monday will also have a moon nearly as full as that of the 22nd, with moonrise only a little later.

Don’t miss this opportunity to experience this unique astronomical and maritime event. We’ll make memories you will treasure for a lifetime. Like all Olde World Sailing cruises, you will be treated to Tampa’s most luxurious sailing line, with extravagant hors d’oeuvres, live music, flowers, and First Cabin service from the moment you board. 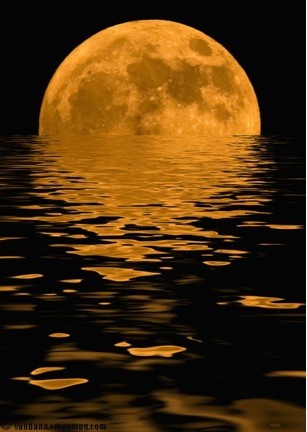 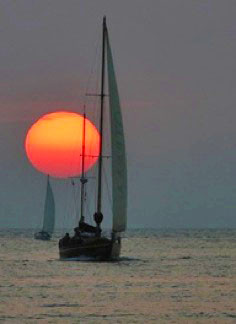 Chasing the Sun to the Horizon

Sailing Tampa Bay – One of Florida’s Most Productive Natural Habitats

One of the most profound pleasures of sailing on beautiful Tampa Bay is the abundance of sea life we encounter. Tampa Bay is Florida’s largest estuary – an enclosed body of coastal waters with one or more rivers flowing into it, opening to the sea. Four rivers empty into our bay, the Hillsborough River, at Tampa, the Alafia, near Gibsonton, the Little Manatee, near Ruskin, and the Manatee River at Bradenton.

Estuaries are a transition zone between river and open ocean environments and are subject to both marine influences, such as tides, waves, and the influx of saline water and river influences, such as flows of fresh water and sediments. This combination of both seawater and fresh water provide high levels of nutrients, making estuaries among the most productive natural habitats in the world. Thanks to long term improvements in environmentally friendly practices, Tampa Bay water quality is at decades-high levels.

Tampa Bay is Teaming with Life

Over 500 resident dolphins call Tampa Bay home 12-months of the year, according to Florida Aquarium researchers. Dolphins visit Lionheart on most every sail, often riding the sailboat’s bow waves and side wakes, sometimes only a couple feet away. During these encounters you can look directly into their eyes and feel the very real presence of “someone” looking back at you with equal curiosity – an awesome experience every time! The forceful sound of their exhaling breath punctuates the air and can be startling when you’re not expecting them. The dolphins seem clearly to swim with the boat for the mere fun of it. 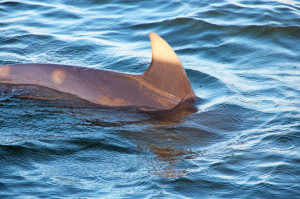 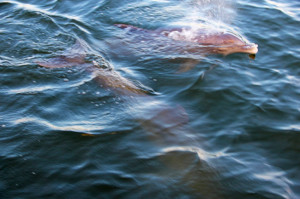 On other occasions, the dolphins can be seen feeding on schools of fish. While on their dinner forays, the dolphins don’t pay much attention to the boat, but their swimming pattern makes observations and photo ops much longer. The dolphins leap through the waves chasing their prey and thus remain visible for a more extended time.

Most Diverse Colonies in the Continental United States

Pelicans and cormorants put on a predictable show on virtually every sailing tour as they forage for dinner. And scores of other sea birds become a welcome part of the Tampa Bay ecosystem and a delightful part of our sailing cruises. Every year, up to 18,000 nesting pairs of nearly 20 bird species nest in various spoil islands located within Tampa Bay. The spoil islands, now tree-covered, were formed from the sand and mud deposited when the Tampa shipping channel was dredged in the late 1920’s. Bird Island, near the mouth of the Alafia River, is the top-nesting site in Florida for roseate spoonbills and is one of the most diverse bird colonies in the continental United States. Sunset sailing tours are often the most ideal times to get up-and-personal with the rich diversity of sea life of Tampa waters.

Mermaids from the Deep

But no matter how many times we sail these beautiful waters, it is impossible to become complacent. An unexpected twist seems always just around the next wave. On a sailing tour last week near sunset, Lionheart had a very close encounter with a friendly manatee. The manatee didn’t appear at all disturbed by our presence and remained nearby for over 15 minutes before disappearing into the depths. Sailboats have an extraordinary advantage when encountering marine life because of their natural quietness. When aboard a sailboat, your senses are much more attuned to the sea environment than when barging through the waves under power. Your sense of hearing, smell, and even sight is enhanced when moving with the elements rather than fighting them. Most important, sailing vessels do not harm these gentle creatures with prop strikes. 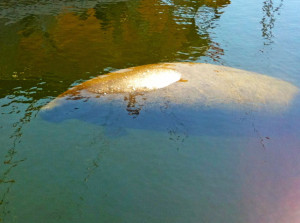 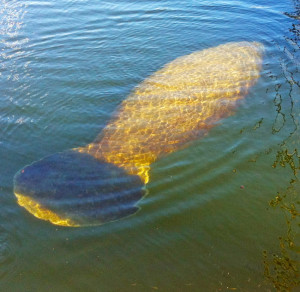 If you are fortunate enough to share some space with any of these magnificent marine animals, please be sure not to feed them or disturb their normal behavior (it’s also against the law). As with all wild creatures, whether on land or in the sea, frequent encounters with mankind often turn out badly for them. Observe and respect them. Enjoy them. But let them do their thing and appreciate the privilege of their company.

See Florida and the Tampa Bay Area as you’ve never experienced it before – from the decks of an ocean-going sailing yacht.  Lionheart sails daily from the Tampa Convention Center Docks.  Book your expedition here.

Olde World Sailing Line has developed a reputation for providing the most luxurious day cruises from Tampa. Are you ready for a Tampa romantic getaway? Whether a beautiful Half Day Sail, Full Day Sail, or magnificent Sunset Cruise, we strive to make every sail a very special occasion for our guests. Each cruise features elegant hors d’oeuvres, fresh flowers, imported chocolates, live music, all aboard a 44’ world class sailing yacht.

Dinner at the Captain’s Table

It is on Olde World’s Sunset Dinner Cruises, however, that Lionheart pulls out all the stops. Dinner Cruises cast off from the Tampa River Walk docks a couple hours prior to sunset. After riding the winds toward the setting sun over Tampa Bay, your teak table is set with fine china, cloth napkins, and silverware. In the galley, your chef is preparing a full 3-course dinner that you selected prior to your cruise, catered from a downtown Tampa restaurant.

As the sun sets, Lionheart becomes your own private “waterfront restaurant”. Your meal is accompanied by the music of a Celtic harp, played by Kathryn, former Florida Orchestra principal harpist. Desserts, chocolates, and bubbly as you wish. Magnificent. 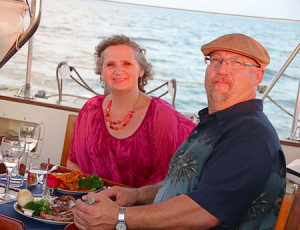 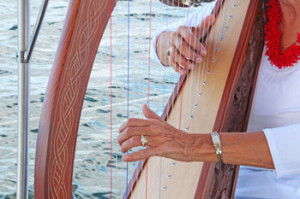 Then conclude your Tampa romantic getaway with a sail back toward civilization and to the spectacular colors of city’s waterfront after dark. You haven’t seen the Tampa Bay area until you’ve seen it from the sea. And you’ll have a completely different and magical impression, when you experience it after nightfall.

Make your reservations HERE for your Sunset Dinner Cruises from Tampa 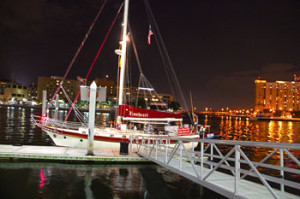 The Gasparilla Pirate Fest is a mainstay of Tampa’s social calendar.  Held each year in late January (some years early February) since 1904, the Gasparilla pirate ship invasion and parades bring between $20M – $40M of booty into the city’s coffers, according to a 2007 study.   This year’s festival and pirate invasion on January 26 saw over 300,000 spectators according to official estimates. 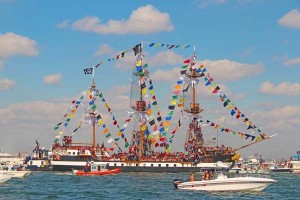 Most people experience Gasparilla from the parade routes, watching the fabulous floats and gathering the sparkling booty.  Parade watchers, however, may miss the invading fleet of thousands of boats, lead by the pirate ship Jose Gaspar, as they storm Tampa’s waterfront and take possession of the Key to the City.   As the armada crosses Tampa Bay enroute to the channel along Davis and Harbor Islands, it is out of easy viewing range for most spectators.  This year the crew (“krewe”) of Olde World Sailing Line boarded the Lionheart to lend firepower to the Jose Gaspar and fleet.  Land bound crowds see only the final 20% or so of the spectacular convoy from the sea to city-center.   I hope you enjoy these photos of our up close and personal encounter with the floating hoards.  Check out the additional photos with on Olde World Sailing’s Facebook and Pinterest pages.  Also see the Gasparilla section on the Gallery on this website.  More to come . . .

A Toast to the Crew

It’s Not the Size! It’s the Enthusiasm.