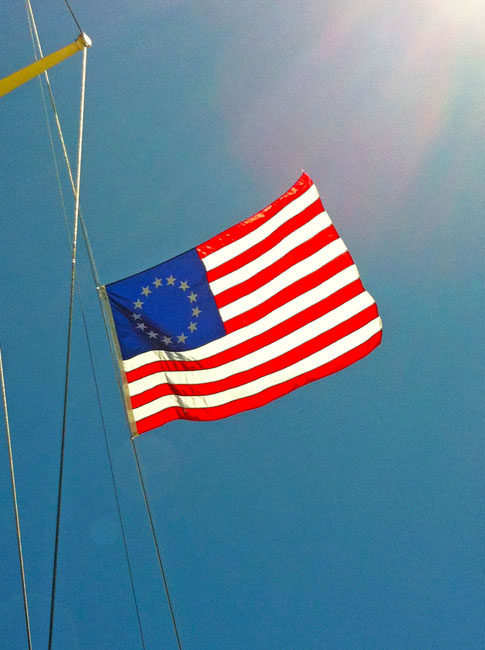 Olde World Sailing Line provides the most luxurious sailboat cruises on Florida’s west coast.  Every one of our Tampa Bay sailing tours is a tribute to the Golden Age of Seafaring – a time when sea travel was the epitome of luxury and First Class service. As a “tip-of-the-hat” to this maritime heritage, Lionheart has always flown the Colonial American flag, sometimes called the “Betsy Ross” flag.

Our previous company was a hot air balloon operation called 18th Century Aviation, in honor of the world’s first aircraft flight in 1786. Our newest balloon was named “DaVinci’s Dream”, from which we flew the Colonial Flag, thousands of feet over the Tampa Bay area on bright early mornings. It seemed fitting that when Lionheart was put into service at Olde World Sailing Line, we crowned her with the original flag that flew on DaVinci’s Dream. 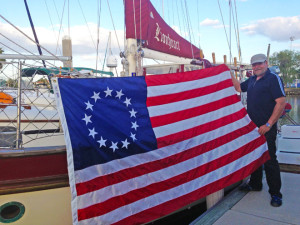 This flag was a good-sized flag, at 3×5 feet. However, when we saw an opportunity to acquire an even larger 5×8 feet flag, we couldn’t resist. Not until we brought the new flag to the dock alongside Lionheart, however, did we realize how very BIG an 8-ft. long flag really is.

Lionheart is a big girl, however, and once hoisted aloft high on the backstay, the new flag looked wonderful, and fully proportional to the sailboat’s 44’ length. What do you think? Do you like the circular star pattern of the Betsy Ross flag? Did you know that American historical flags are still considered “official” flags – American Flags remain officially authorized flags, even when newer designs are adopted? 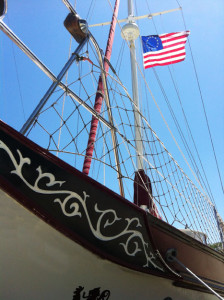 The large new flag looks great, but we are bit saddened to replace our DaVinci’s Dream original flag – it brings many happy memories. However, any flag on a sailboat cruise takes a beating. We’ll relegate our beloved 18th Century Aviation’s flag to a safer indoor locale. And if you’re in the downtown Tampa area near the Convention Center or Bayshore Drive, see if you can spot the huge Betsy Ross flag flying from Lionheart. Give us a wave!

Elegant Dinner On Your Sunset Cruise from Tampa
Scroll to top