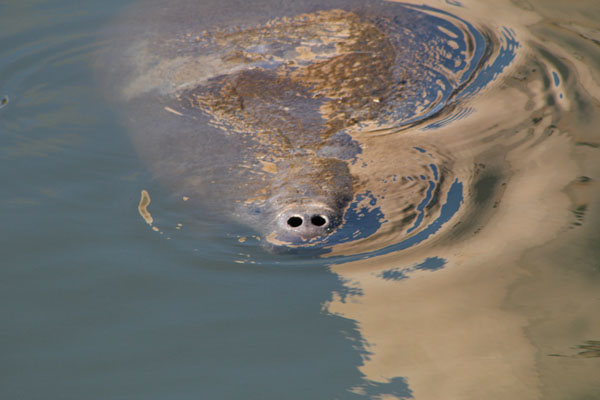 The winter months in Central Florida are some of the most beautiful months of the year. The air is crisp and clear as well as the waters of Tampa Bay as summer algae dissipates. This year November and December have provided us many spectacular sails, brilliant sunsets, and abundant wildlife encounters.

As many of you have experienced, Lionheart is often escorted by playful pods of dolphins throughout the year, frequently coming alongside a mere two or three feet from the hull riding our wake. But during the winter months the dolphins are joined by an influx of huge flocks of migrating water birds, including the rare white pelican. On numerous November and December sails we have encountered bald eagles as they dive for nearby fish. The most anticipated winter visitor, though, is the iconic manatee. These warm-blooded mammals, reputedly mistaken as mermaids by early sailors, look a bit like a walrus without tusks. Manatees are strictly herbivores, feeding on sea grass and other vegetation, and are very social animals.

As the Gulf waters cool below about 68 degrees F, manatees move into the warmer Tampa Bay (as well as fresh water springs and rivers). Since they must rise to the surface to breathe, manatee sightings are a highlight of any Olde World

Sailing trip, thrilling our seafaring guests both local and out-of-state. But given that Tampa Bay is Florida’s largest estuary spanning around 40 miles from Tampa to the Gulf, spotting manatees is not an everyday occasion aboard Lionheart. The good captain, however, can point you to a very nearby “Manatee hole” where you’ll see wild manatees by the dozens – up-close and personal.

The Tampa Electric Power Plant, in Apollo Beach, burns coal to generate pressurized steam that drives their turbines. To convert this steam back to water, the plant pumps in cooler seawater from the bay. As the seawater interacts with the steam, it too becomes much warmer. This warm seawater is then discharged back into a canal next to the power plant. Manatees like this a lot!

Manatee Sanctuary    In 1986 the state of Florida declared this canal an official manatee sanctuary. It is a winter hot spot for migrating manatees.  The Tampa Electric Company has built a visitors center and beautiful boardwalk overlooking the canal. There you can learn more about manatees and walk out over the water to view dozens and dozens of manatees in their natural habitat.

Take I-75 south from Tampa and exit at the Apollo Beach exit. A left hand turn from the ramp will take you directly to the Tampa Electric Manatee Viewing Area. There is no charge to enjoy this fabulous natural wonder. Tell them Captain Mac sent you (http://tampaelectric.com/company/mvc/).

Please Be Careful On the Water

During 2013 Florida recorded more manatee deaths than ever before – 800+, vs. around 300 in 2012. Scientists are not sure the reasons for the jump in mortality, but injuries and death by speeding boats is one serious cause. Please observe Manatee Zone signs when you’re on the water.

Manatee Up for Air

Mother Showing Off her Newborn

ROMANCE ON THE HIGH SEAS