Tampa Bay’s dirty little secret is that its famed annual Gasparilla celebration is a fake. Jose Gaspar, the fabled pirate for which our celebration is named, never lived – he’s a tall tale at best. And his famed pirate ship that leads the Tampa invasionisn’t even a ship – it’s an unpowered barge!

This year, however, city guests and residents alike will be treated to the real thing – a genuine pirate ship, under her own sails, straight out of history. At least that’s what the invading British called the Lynx and ships like her during the War of 1812. Lynx was one of the fastest of the “privateers”, extraordinary schooners that sailed circles around the massive Royal Navy and terrorized it’s merchant fleet. The privateers, owned and crewed by private citizens, sank many of the much larger British man-o-war ships and hundreds of their merchant ships along the Atlantic coast. The Royal Navy called the Fells Point area of Baltimore Harbor, where many of the privateers were constructed, a “Den of Pirates”.

Decked Out for War . . . and Education 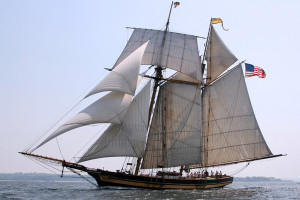 Today’s Lynx is of course not the original ship from the War of 1812 – only the Constitution survives today from that war. She’s a replica built in Rockport, Maine, and operated by the Lynx Educational Foundation as a living history museum to educate children and adults alike about American history through active sail training aboard a real wooden sailing ship. Lynx is armed with a functioning main battery of four six-pounder carronade and four swivel guns. In addition, a complementary stand of historic small arms, for demonstration and instructional purposes, is aboard, including muskets, pistols, cutlasses, boarding pikes and axes. To maintain the historic integrity of the onboard experience, the permanent crew of Lynx wears uniforms and operates the ship in keeping with the maritime traditions of early 19th Century America.

Come Aboard in Tampa or St. Petersburg

The Lynx is visiting at the Tampa Convention Center docks, near Lionheart’s berth, through Wednesday, January 22nd, then departs Thursday for a short stay in St. Petersburg. The Lynx will join the Jose Gaspar and the Gasparilla fleet on January 25th as they invade Tampa – watch for those tall masts and majestic square-rigged sails! She will return to share the Tampa Convention Center docks with Lionheart for another ten days on February 17th. Then she’ll sail back to St. Petersburg, where she will remain until March 13. 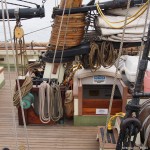 On Deck Aboard Lynx

Don’t miss this rare opportunity to walk the decks of this grand tall ship. Better yet, go aboard for a journey back in time as Lynx puts to sea in the beautiful waters of Tampa Bay. Numerous ship tours and sailings are scheduled during their Tampa and St. Pete visits. And plan a January or February cruise with Olde World Sailing Line aboard Lionheart, as she escorts Lynx throughout Tampa Bay. You’ll get unbelievable up-close pictures of Lynx under full sail.

See a Great Video of the Lynx

Learn more about the Privateer Lynx and her schedule at www.privateerlynx.com.

Under Full Sail in Tampa Bay

Fastest of the Privateers

A bad sight for the British

A VIP Guest Experience – from 98Rock Baltimore
Scroll to top